Under the standards, the county (or counties) in which at least 50 percent of the population resides within urban areas of 10,000 or more population, or that contain at least 5,000 people residing within a single urban area of 10,000 or more population, is identified as a "central county" (counties). Additional "outlying counties" are included in the CBSA if they meet specified requirements of commuting to or from the central counties. Counties or equivalent entities form the geographic "building blocks" for metropolitan and micropolitan statistical areas throughout the United States and Puerto Rico. The basic categories of the 2010 OMB Metropolitan classifications include:

Given the changes and shortcomings to traditional definitions used to identify rural areas, HAC developed a sub-county designation of rural and small-town areas which incorporates measures of housing density and commuting at the Census tract level to establish a more precise measure of rural character.1 This alternative residence definition includes six classifications: 1) rural, 2) small-town, 3) exurban, 4) outer suburban, 5) inner suburban, and 6) urban. For simplicity, these designations are often collapsed into 3 general classifications of: 1) small town and rural tracts, 2) suburban and exurban tracts, and 3) urban tracts.

The HAC rural tract classifications are specifically defined by the following characteristics.

2 = Small-town tract – Sixteen to 64 housing units per square mile (.025 to 0.1 housing units per acre), as well as a low degree of commuting to a metropolitan core area identified by a USDA ERS designated “Rural Urban Commuting Area Code” (RUCA) score of 4 or higher.

3 = Exurban tract - Sixteen to 64 units per square mile (.025 to 0.1 housing units per acre) along with a high degree of commuting to a metropolitan core area identified by a USDA ERS Rural Urban Commuting Area Code (RUCA) score of 3 or lower.

The Rural-Urban commuting area (RUCA) codes, a detailed and flexible scheme for delineating sub-county components of the U.S. settlement system developed by the U.S. Department of Agriculture’s Economic Research Service (ERS). RUCA codes are based on the same theoretical concepts used by the Office of Management and Budget (OMB) to define county-level metropolitan and micropolitan areas. We applied similar criteria to measures of population density, urbanization, and daily commuting to identify urban cores and adjacent territory that is economically integrated with those cores. ERS adopted OMB’s metropolitan and micropolitan terminology to highlight the underlying connectedness between the two classification systems. However, the use of census tracts instead of counties as building blocks for RUCA codes provides a different and more detailed geographic pattern of settlement classification. Census tracts are used because they are the smallest geographic building block for which reliable commuting data are available. 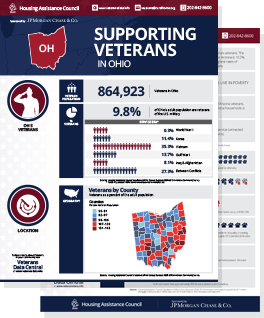 Nearly 8 in 10 veterans are homeowners
Approximately 3 million veterans live in homes with one or more major problems of quality, crowding, or cost.