Median. This measure represents the middle value (if n is odd) or the average of the two middle values (if n is even) in an ordered list of n data values. The median divides the total frequency distribution into two equal parts: one-half of the cases falling below the median and one half above the median. The median is computed on the basis of the distribution as tabulated, which is sometimes more detailed than the distribution shown in specific census publications and other data products.

Interpolation. Interpolation frequently is used in calculating medians or quartiles based on interval data and in approximating standard errors from tables. Linear interpolation is used to estimate values of a function between two known values.

Rate. This is a measure of occurrences in a given period of time divided by the possible number of occurrences during that period. Rates are sometimes presented as percentages. 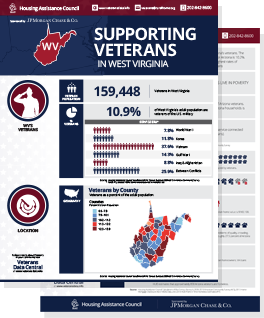 23.0% of veterans have a service connected disability rating
Younger veterans are much more racially diverse than older veterans