The American Community Survey (ACS) is a nationwide survey designed to provide communities with reliable and timely demographic, social, economic, and housing data every year. The U.S. Census Bureau will release data from the ACS in the form of both single-year and multiyear estimates. These estimates represent concepts that are fundamentally different from those associated with sample data from the decennial census long form.

Every 10 years since 1790, Congress has authorized funds to conduct a national census of the U.S. population. The decennial census is required by the U.S. Constitution. Recent censuses have consisted of a “short form,” which included basic questions about age, sex, race, Hispanic origin, household relationship, and owner/renter status, and a “long form.” The long form was used at only a sample of households and included not only the basic questions on the short form but also detailed questions about social, economic, and housing characteristics. The questions on the long form supplied the raw data needed for a range of programs affecting education, veterans, employment, housing and community development, public health care, commuting, services for the elderly and disabled, and assistance programs for low-income families and children. About $300 billion in federal program funds are distributed each year based, in whole or in part, on these data.

The U.S. Census Bureau, under the authority of Title 13, U.S. Code, Sections 141 and 193, conducts the American Community Survey. Title 13 also requires that the Census Bureau use this information only for statistical purposes. All statistical tables and public use files based on ACS results strictly maintain the confidentiality of individual responses.

Survey questionnaires are sent to approximately 250,000 addresses across the country every month. Addresses from which a questionnaire is not returned by mail are followed-up, first in an attempt to obtain the information by telephone, and then, for a sample of nonresponding households, in person by a Census Bureau field interviewer.

Based on responses from the series of 12 independent monthly samples each calendar year, the ACS can provide estimates of demographic, housing, social, and economic characteristics for all states, as well as for cities, counties, metropolitan areas, and population groups of 65,000 or more. These estimates, based on a full year’s worth of collected ACS data, are called “1-year estimates.” For less populated areas, such as rural villages and towns, 3 or 5 years of ACS data are accumulated to produce statistically reliable estimates of population and housing characteristics. Estimates for areas with populations of 20,000 or more are based on data collected over 3 years (“3-year estimates”).

For rural areas, urban neighborhoods, census tracts, block groups, and population groups of fewer than 20,000 people, it will take 5 years to accumulate enough survey data to achieve data estimates with statistical reliability that is similar to that of the Census 2000 long-form sample survey. These latter survey estimates, called “5-year estimates,” are published for areas with small populations each year.

In order to deliver more timely information for all the geographic areas served by the decennial long form, the Census Bureau designed the ACS as a sample survey using a continuous measurement approach to data collection. A sample of 3 million addresses is drawn from the Census Bureau’s Master Address File (MAF) each year. For geographic areas with populations larger than 65,000, the sample is sufficient to produce reliable estimates based on a year’s worth of responses. However, in order to provide estimates for areas with smaller populations, the sample must be accumulated over a number of years. The Census Bureau produces 3-year estimates for areas down to populations of 20,000 or more and 5-year estimates for all units of census geography.

Veteran Status. II Veterans are men and women who have served (even for a short time), but are not currently serving, on active duty in the U.S. Army, Navy, Air Force, Marine Corps, or the Coast Guard, or who served in the U.S. Merchant Marine during World War II. People who served in the National Guard or Reserves are classified as veterans only if they were ever called or ordered to active duty, not counting the 4-6 months for initial training or yearly summer camps. All other civilians are classified as nonveterans. (2010 Census /2007-2011 American Community Survey)

While it is possible for 17 year olds to be veterans of the Armed Forces, ACS data products are restricted to the population 18 years and older.

Answers to this question provide specific information about veterans. Veteran status is used to identify people with active duty military service and service in the military Reserves and the National Guard. ACS data define civilian veteran as a person 18 years old and over who served (even for a short time), but is not now serving on acting duty in the U.S. Army, Navy, Air Force, Marine Corps or Coast Guard, or who served as a Merchant Marine seaman during World War II. Individuals who have training for Reserves or National Guard but no active duty service are not considered veterans in the ACS. These data are used primarily by the Department of Veterans Affairs to measure the needs of veterans.

Used to allocate funds to states and local areas for employment and job training programs for veterans under the Job Training Partnership Act.

For the 1999-2002 American Community Survey, the question was changed to match the Census 2000 item. The response categories were modified by expanding the "No active duty service" answer category to distinguish persons whose only military service was for training in the Reserves or National Guard, from persons with no military experience whatsoever.

Beginning in 2003, the "Yes, on active duty in the past, but not now" category was split into two categories. Veterans are now asked whether or not their service ended in the last 12 months.

There may be a tendency for the following kinds of persons to report erroneously that they served on active duty in the Armed Forces: (a) persons who served in the National Guard or Military Reserves but were never called to duty; (b) civilian employees or volunteers for the USO, Red Cross, or the Department of Defense (or its predecessors, the Department of War and the Department of the Navy); and (c) employees of the Merchant Marine or Public Health Service.

The ACS has two separate questions for veteran status and period of military service, whereas in Census 2000, it was a two-part question. The wording for the veteran status question remains the same, however, the response categories have changed over time (see the section "Question/Concept History").

Period of Military Service. III People who indicate that they had ever served on active duty in the past or were currently on active duty are asked to indicate the period or periods in which they served. Currently, there are 11 periods of service on the ACS questionnaire. Respondents are instructed to mark a box for each period in which they served, even if just for part of the period. The periods were determined by the Department of Veterans Affairs and generally alternate between peacetime and wartime, with a few exceptions. The responses to this question are edited for consistency and reasonableness. The edit eliminates inconsistencies between reported period(s) of service and age of the person; it also removes reported combinations of periods containing unreasonable gaps (for example, it will not accept a response that indicated the person had served in World War II and in the Vietnam era, but not in the Korean conflict).

In 1999, the response categories were modified by closing the "August 1990 or later (including Persian Gulf War)" period at March 1995, and adding the "April 1995" or later category.

For the 2001-2002 American Community Survey question, the response category was changed from "Korean conflict" to "Korean War."

Since Census 2000, the period of military service categories on the ACS questionnaire were updated to: 1) include the most recent period "September 2001 or later;" 2) list all "peace time" periods without showing a date-breakup in the list; and 3) update the Korean War and World War II dates to match the official dates as listed in US Code, Title 38. While the response categories differ slightly from those in Census 2000, data from the two questions can still be compared to one another.

A detailed description of ACS data collection methodology and the survey’s sample design may be found at: http://www.census.gov/acs/www/SBasics/desgn_meth.htm.

The Home Mortgage Disclosure Act (HMDA) was enacted by Congress in 1975 and is implemented by the Federal Reserve Board's Regulation C. This regulation applies to certain financial institutions, including banks, savings associations, credit unions, and other mortgage lending institutions. In 2014, there were approximately 13.7 million loan records for calendar year (CY) 2013 reported by over 7,000 financial institutions.

Using the loan data submitted by these financial institutions, the Federal Financial Institutions Examination Council (FFIEC) creates aggregate and disclosure reports for each metropolitan area (MA) that are available to the public at central data depositories located in each MA.

While HMDA data are a critical resource to understanding lending trends, the limitations of these data in rural areas must be acknowledged. Only those depository institutions with assets of $43 million or more that were headquartered in a metropolitan area were required to report HMDA data in 2013. Consequently, an untold number of rural lending data are unavailable, as many small, rural financial institutions are not required to report lending information. Despite these limitations, HMDA provides the best available information on rural lending. For detailed information about FFIEC Home Mortgage Disclosure Act data used in this database please consult, Home Mortgage Disclosure Act: About the Data, http://www.ffiec.gov/hmda/about.htm.

The Point-in-Time (PIT) count is a count of sheltered and unsheltered homeless persons on a single night in January. HUD requires that Continuums of Care conduct an annual count of homeless persons who are sheltered in emergency shelter, transitional housing, and Safe Havens on a single night. Continuums of Care also must conduct a count of unsheltered homeless persons every other year (odd numbered years). Each count is planned, coordinated, and carried out locally. The Housing Inventory Count (HIC) is a point-in-time inventory of provider programs within a Continuum of Care that provide beds and units dedicated to serve persons who are homeless, categorized by five Program Types: Emergency Shelter; Transitional Housing; Rapid Re-housing; Safe Haven; and Permanent Supportive Housing. For more information on HUD’s Point in Time methodology please consult: https://www.hudexchange.info/resources/documents/PIT-Count-Methodology-Guide.pdf

Federal health care facilities from the Veterans Affairs Department for the United States, Philippines, and select island areas. Data as of 9/30/2010. http://www.va.gov/vetdata/docs/Maps/FMF_Main_April092012.pdf 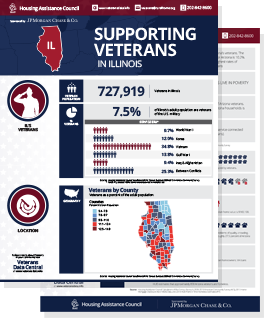 Alaska has the highest concentration of veterans – 12.2% of the population
Nearly 8 in 10 veterans are homeowners