Margin of Error in the American Community Survey.VIII

Data from the American Community Survey (ACS) is based on a sample and is subject to sampling variability. Sampling error is the uncertainty associated with an estimate that is based on data gathered from a sample of the population rather than the full population. The American Community Survey (ACS) provides users with measures of sampling error along with each published estimate. To accomplish this, all published ACS estimates are accompanied either by 90 percent margins of error or confidence intervals, both based on ACS direct variance estimates.

Point estimates use statistical techniques, such as regression models, to infer from sample data what the actual value of the characteristic is in the population. These point estimates can be thought of as a best guess of the population characteristic value, given the available sample survey data information. As with any guess or prediction, estimates are only as reliable as the information they are based on. Estimates such as those presented in the ACS can vary in precision, especially in relationship to the overall sample size. A smaller number of sample observations leads to less accurate estimates, while a larger number of sample observations often provide more accurate estimates.

For more information of accuracy of data from the American Community Survey please consult the Census Bureau publication, ACS Design and Methodology: http://www.census.gov/acs/www/methodology/methodology_main/ 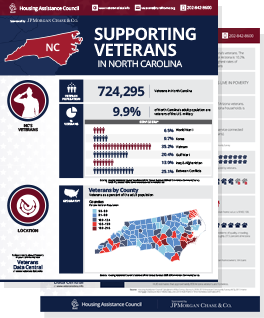 Approximately 25.2% of veterans pay too much for their housing
Approximately 3.3 million veterans live in homes with one or more major problems of quality, crowding, or cost.